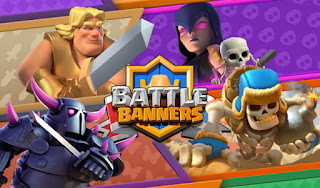 It’s time to express yourself with our newest update, launching very soon!

HERE ARE SOME DETAILS ABOUT THE SUMMER UPDATE

Battle Banners are brand new cosmetic items that will appear at the beginning of each Battle and will represent you and your style in Clash Royale!
A Battle Banner is made up of two Battle Banner items (a Banner Frame and a Banner Decoration) and three badges of the player’s choosing.

You can currently earn Banner Tokens from:
Special Challenges
Mastery Rewards
Keep an eye out for other sources that will give out Banner Tokens in the future!
You can hold up to 200 Banner Tokens at a time.
On the, very rare, occasion where the Banner Token inventory is full and the Banner Box has no more items (e.g you already collected all Banner items for that Season), Banner Tokens can be collected beyond the limit of 200.
(INFORMATION FROM THE OFFICIAL CLASH ROYALE WEBSITE)

BADGES IN YOUR PROFILE

Players now have the ability to pick and choose which Badges they want to show off!
In addition to the three Badges that can be displayed on your Battle Banner, you can now display specific Badges in your profile!
Note: You can still view all of your own (or another player’s) Badges by tapping ‘Show Collection’.